Conversations about gender identity confusion are steadily increasing in our world. Beginning with young children and continuing throughout adulthood, society is teaching and embracing gender distortions.

These new trends are being hailed as “courageous”, “praiseworthy”, “brave” and in the case of children, “good parenting.” In a radical move, some have coined the phrase “TransKid” and announced 2015 as “The Year of the Transgender Child.” Update: In January 2017, National Geographic produced a magazine and documentary which further promoted false ideologies as truth combined with errors, weak science and contradictory claims (see: National Geographic‘s “Gender Revolution”: Bad Argument and Biased Ideology.) All of these examples—a mere sampling among thousands exploding into society—deserve a stern and necessary rebuke.

And so, with the increasing attention towards gender confusion in society, how can we become grounded in LDS doctrine and dismiss gender trends that go against eternal truths? What have prophets and apostles said about gender? How can the rising generation discern between right and wrong, while a tsunami of spiritually and physically dangerous false doctrines and messages that flood their world? What can parents and leaders do to better teach and prepare children and youth to understand issues surrounding gender and eternal identity?

In order to help teach truths about the doctrine on the eternal nature of gender, we need to first understand the contrasting messages that activist groups, social media, movies, magazines, and television are promoting.

Society is now (wrongly) teaching that our bodies and spirits can be disconnected and that gender is fluid and changeable, and (falsely) asserting that people are born in the wrong body (believing that God places the wrong spirits into the wrong bodies.) Activist groups and large organizations are lobbying for dramatic changes in public policy and medical policies including the notion that gendering a baby at birth is discriminatory. These groups are mobilizing at a rapid pace with highly organized and heavily funded efforts, beginning with teaching the youngest children and aggressively marketing youth and university students. These groups wield powerful political swords while neglecting those who sincerely suffer from gender dysphoria.

Here are some important research points to consider:

“The Gender Identity Development Service in the United Kingdom alone has seen a 2000% increase in referrals since 2009.”

“Individuals with transgender reassignment have a rate of suicide of 41%—22 times higher—than that of the overall US population. Studies show a majority of transgender patients suffer from other comorbid (co-existing) disorders (including dissociative disorders).”

Kathy’s story: A former transgender-identified woman from another Christian faith

The doctrine of The Church of Jesus Christ of Latter-day Saints clearly teaches that gender is an essential characteristic of who we were before we were born. Each of us is a beloved son or daughter of God who has a gender which was determined in the premortal life, and it will continue in this life and the eternities.[8] Gender is part of both our eternal and physical DNA and is unalterable and unchangeable. Why? Because our doctrine is such that “the spirit and the body are the soul of man” (emphasis added).

President Boyd K. Packer was clear in his teachings that,“From our premortal life we were directed into a physical body. There is no mismatching of bodies and spirits”  and “We know that gender was set in the premortal world. The spirit and the body are the soul of man.” (How to Survive in Enemy Territory,” Seminary Centennial Broadcast, April 2012.)

To answer perplexing social and moral issues, members of The Church of Jesus Christ of Latter-day Saints can to go to one of the most definitive compilations of doctrinal statements in the Church, The Family: A Proclamation to the World. Of this, Elder M. Russell Ballard says: “Gender is being confused, and gender roles are being repudiated.”[11]

Countless other Church leaders have taught about the significance and doctrine of eternal gender, including:

Elder James E. Talmage: “There is no accident or chance, due to purely physical conditions, by which the gender of the unborn is determined. The body takes form as male or female, according to the gender of the spirit whose appointment it is to tenant that body as a tabernacle formed of the elements of earth, through which means alone the individual may enter upon the indispensable course of human experience, probation, and training. … Man is man, and woman is woman, fundamentally, unchangeably, eternally. Each is indispensable to the other and to the accomplishment of the purposes of God.”[11]

Virginia U. Jensen: “Look at the lessons God taught a floundering world through this proclamation: Marriage between a man and a woman is ordained of God. We are created in His image. Our gender was determined before we came to earth and is part of our eternal identity.”[12]

President Boyd K. Packer: “I want to speak now in the pattern of straight talk about another matter. We know that gender was set in the premortal world. “The spirit and the body are the soul of man.”4 This matter of gender is of great concern to the Brethren, as are all matters of morality.”[13]

Elder Richard G. Scott: “Your gender existed before you came to earth.”[14]

Elder Dallin H. Oaks: “Individual identity began long before conception and will continue for all the eternities to come.”[16]

President Boyd K. Packer: “The scriptures and the teachings of the Apostles and prophets speak of us in premortal life as sons and daughters, spirit children of God. Gender existed before, and did not begin at mortal birth.[17]

Gender is determined premortally and continues throughout this life and the eternities. Below are some insightful quotes from Church leaders that teach us about the divine differences and eternal purposes in gender: 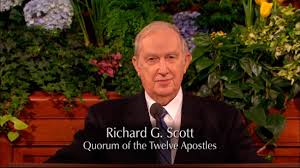 Elder Richard G. Scott: “The scriptures record, “And I, God, created man … male and female created I them.” 1 This was done spiritually in your premortal existence when you lived in the presence of your Father in Heaven. Your gender existed before you came to earth. You elected to have this earth experience as part of His plan for you.”[18]

Margaret D. Nadauld, speaking to the Young Women: “That women were born into this earth female was determined long before mortal birth, as were the divine differences of males and females. … we are taught that every girl was feminine and female in spirit long before her mortal birth.”[19]

The Plan of Salvation and Gender

Each of us came to this earth to receive a body and to be born into and create a family. Because the family is central to God’s plan, Satan persistently strives to confuse society about the divinely appointed purposes of gender, marriage, and family.

Sheri L. Dew: “Satan bombards us with bizarre messages about gender, marriage, family, and all male-female relationships. … Our Father knew exactly what He was doing when He created us.”[26]

Elder David A. Bednar: “More recently the devil has attempted to combine and legally validate confusion about gender … as we look beyond mortality and into eternity, it is easy to discern the counterfeit alternatives. … Satan works unremittingly to confuse understanding about gender, to promote the premature and unrighteous use of procreative power, and to hinder righteous marriage precisely because marriage is ordained of God and the family is central to the plan of happiness. … [Satan] persistently strives to confuse the divinely appointed purposes of gender, marriage, and family. Throughout the world, we see growing evidence of the effectiveness of Satan’s efforts.”[27]

Elder Dallin H. Oaks: “We live in a day when there are many political, legal, and social pressures for changes that confuse gender and homogenize the differences between men and women. … Satan’s most strenuous opposition is directed at whatever is most important to the Father’s plan. Satan seeks to discredit the Savior and divine authority, to nullify the effects of the Atonement, to counterfeit revelation, to lead people away from the truth, to contradict individual accountability, to confuse gender.”[28]

Elder M. Russell Ballard: “When evil wants to strike out and disrupt the essence of God’s work, it attacks the family. It does so by attempting to disregard the law of chastity, to confuse gender.”[29]

Connecting the Dots: One Final Thought

Because we know that gender “in large measure defines who we are, why we are here upon the earth, and what we are to do and become” [36] and that “Satan’s most strenuous opposition is directed at whatever is most important to the Father’s plan”[37], it is no wonder that society is seeking to redefine these truths.

The adversary is using gender confusion in society to dilute one’s God-given identity. He is cruel, clever and calculated in his efforts to confuse and minimize the divine which is within each son or daughter of God. He does this by trying to manipulate, undefine and strip away one’s belief about what it means to be male or female. Confusing, isolating, and disengaging a person from their God-given identity has dramatic and devastating consequences. It separates one from understanding who they were, who they are and who they will always be.

Yet we know the doctrine. We know the truth about our unchangeable and eternal gender identity. We not only know who we are, but Whose we are.  We have the same eternal identity that always was, is and will be. We can be comforted in knowing these eternal truths and using these truths to teach pure doctrine to our children as they face an increasingly confusing world.

This is a misleading point frequently raised for political purposes. A extremely small percentage of people suffer from disorders of sexual development (DSD), sometimes referred to as an intersex condition (or as hermaphroditism). True hermaphrodites — those in whom sexual anatomy is ambiguous or clearly conflicts with their chromosomal make-up — are rare, estimated by one expert as “occurring in fewer than 2 out of every 10,000 live births.” Transgender individuals are not to be confused with “intersexed.”

*For helpful info on how parents can talk to their children about gender, please visit “Understanding Transgenderism“.

[1] Agee, Christopher B. (2014/12/24). The Latest News About Brad And Angelina’s ‘Transgender’ 8-Year-Old Has People Talking. Retrieved from http://www.westernjournalism.com/latest-news-brad-angelinas-transgender-8-year-old-people-talking/#dKRfegKtsvQ6BOE3.97

2 thoughts on “The truth about gender identity and LDS doctrine”