Deep in the heart of Turkey lies a magical place known as Cappadocia, one of the most awe-inspiring sites my husband and I have ever laid eyes on. Before the time of Christ, an ancient civilization carved out nearly 200 underground cities throughout this region, easily rivaling the set of any Indiana Jones movie. It was incredible!

By the 4th century A.D., these magnificent cities were inhabited by early Christians who were forced to flee underground for protection from violent religious persecution from the Romans. Some of these elaborate and sophisticated cities go eighteen stories below the surface of the earth and boast numerous tunnels, stables, residences, halls, churches, meeting rooms, wells, and passages connecting various cities together. There are churches carved into caves with their walls and ceilings adorned with colorful, detailed biblical frescoes. These underground cities, supporting as many as 20,000 people, protected their citizens from religious persecution and attacks threatening their lives. Archaeologists and historians say that the early Christians tried to defend and protect themselves by using large round stone doors to cover the entrances, complicated maze systems, and even holes in the ceilings which were used to pour hot oil over intruders.

My husband and I were fascinated with the stories told about these faithful early Christians. At one point we arrived at a church eight stories below the surface of the earth. Upon viewing the church, one woman in our group loudly exclaimed, “Why on earth would these people go to all the trouble? Why did they even bother?” I turned and answered her with the first thought that came into my mind, “I really think it’s because they believed in their religion, and their faith caused them to act.”

Similarly, the writer of the book of Hebrews says: “And what shall I more say [of them]? [They] who . . . quenched the violence of fire, escaped the edge of the sword, . . . waxed valiant in fight, turned [armies] to flight . . . They were stoned, . . . were sawn asunder, were tempted, were slain with the sword: . . . wandered about in sheepskins and goatskins; being destitute, afflicted, [and] tormented; ([They] of whom the world was not worthy) . . . wandered in deserts, and in mountains, and in dens and caves of the earth.” (Hebrews 11:32-38.) 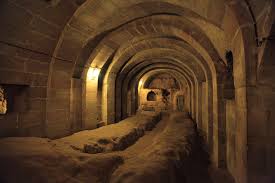 I walked out of those caves in Cappadocia with so many thoughts swirling around in my head. What kind of people would go to such great lengths to preserve their faith? Why didn’t they just give up? Why did they bother? What are costs (and blessings) associated with discipleship today? And, more pointedly, where does my faith stand when challenged?

“Religion is being marginalized to the point of censorship or condemnation,” he said. “Religious voices, values, and motivations are being crowded out of the public square. Accusations of bigotry or animus leveled at those who promote an adverse position have a chilling effect on speech and public debate on many important issues,” he said. “Both freedom of speech and freedom of religion are jeopardized when their advocates are disparaged as being motivated by hatred.”

Despite his concerns, Elder Oaks was optimistic and said, “One reason for optimism is that the threats to religious speech and religious freedom have become so notorious that our citizens are beginning to become concerned.” Are we among those concerned enough to make a stand for religious speech and religious freedom in our realms of influence? Are we going to stand and defend our faith as impressively as the early Christians?

Ironically, retreating underground was the best way that they could defend their faith. Today, the best way we can defend our faith and stand with Christ is to remain “above ground”, visible for the world to see.

Have we been too comfortable as Christian disciples? Perhaps. In the August 2015 Ensign, President Russell M. Nelson said:

During these perilous times, life will not be comfortable for true disciples of the Lord Jesus Christ. But we will have His approval. He gave us this assurance: “Blessed are all they who are persecuted for my name’s sake, for theirs is the kingdom of heaven” (3 Nephi 12:10).

In short, as disciples, each of us will be put to the test. At any hour of any day, we have the privilege of choosing between right and wrong. This is an age-old battle that started in a premortal realm. And that battle is becoming more intense every day. Your individual strength of character is needed now more than ever before. … The day is gone when you can be a quiet and comfortable Christian.

As members of The Church of Jesus Christ of Latter-day Saints, we’re a covenant making and keeping people. We have made sacred covenants at baptism to stand for Jesus Christ. Fortunately, we don’t need to retreat into underground caves to survive the battles going on around us. Yet sometimes we may unwittingly retreat for different reasons. I’ve seen first-hand the ways in which the adversary uses tactics of fear and silence to encourage good and faithful people to retreat. All of us can relate. We might worry that we aren’t knowledgeable enough or have a strong enough testimony to defend doctrine. We may fear we’re rocking the boat by sharing principles and doctrines that go against social trends. Perhaps we may not even want to “row the boat” and remain silent because we don’t want to ruffle any feathers (or get attacked). But Elder Jeffrey R. Holland advised us in the April 2014 General Conference to “Be strong. . . . Defend your beliefs with courtesy and with compassion, but defend them.”

We must remain above ground, standing for religious freedom and morality in social media, in our communities, in our homes, at work, and in conversations with our friends and family. If you’re worried about not feeling strong enough to defend a point of doctrine, take courage! Know that you have all the resources you need on LDS.org to defend truth with clarity and precision. Use the Holy Ghost as your guide and then stand and not flinch in the face of opposition, wherever that may arise.

I know that we are never alone and we need not fear. The early Christians in Turkey went to great lengths to maintain their religion and were required to do so in very unique ways. Even today, these 4th century saints are remembered as people who did everything they could to defend their faith. These are the types of people that history remembers and reveres. What kind of legacy will our faith leave for generations to come? And, when asked the questions, “Why on earth did you go to so much trouble to defend your faith? Why did you bother?” I hope we can each confidently answer, “I believed, and my faith caused me to act.”

Images courtesy of Turkish Tourism Board and personal photos from the author.